A new animated film about family homelessness and helping neighbors

As program manager for Seattle University’s Faith & Family Homelessness Project, I spend much of my time visiting local emergency shelters, churches, synagogues and mosques. During my visits, I often meet dedicated volunteers who spend countless hours providing meals, collecting clothes, back to school supplies, and hygiene items, for people experiencing homelessness (you all know who you are!).

During these visits, the question I am most frequently asked by volunteers is, does any of this make a difference? They wonder if they really are helping to end family homelessness.

It’s easy to feel overwhelmed and unappreciated when the number of homeless families seems to grow every day. It’s also hard to find the best way to describe the importance of each and every act of kindness, how all those little gestures make a difference.

That’s why I was so excited when I learned about filmmaker Neely Goniodsky’s plans to create the short animated film, “The Smiths,” as part of Seattle University’s Film and Family Homelessness Project.

“The Smiths” is one of four short films created through the project, collectively titled “American Refugees.” 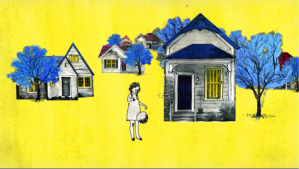 A still from the film “The Smiths.” The vivid colors used throughout the film convey the intense emotions of a family who is homeless, as they try to make ends meet.

I was a member of the project’s advisory team, so I had the opportunity to read the proposal by Neely Goniodsky. As I read it, I knew that the film should be – no, HAD to be – made.

The concept was simple: A child narrates her family’s experience with homelessness and illustrates the importance of a supportive community.

What wasn’t simple was the way Neely skillfully tells the story through beautifully hand-drawn images (a magic bike bell that grants wishes), use of color (things spiral out of control into black), and music (which perfectly fits each step of the family’s journey).

I could watch this film over and over (and I have) and never get tired of it. 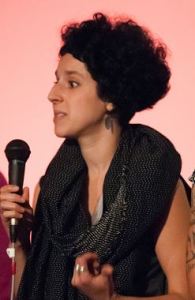 Filmmaker Neely Goniodsky takes a question at the May 19 SIFF premiere of “American Refugees.” Neely directed, co-wrote and animated the film.

The opening scene draws the viewer into the story where we first get a glimpse of the Smiths – the neighbors whose generosity makes all the difference to the 10-year-old narrator’s family. Throughout the four-minute film we learn about her family, and more importantly, how little gestures and acts of kindness on the part of the Smiths and their surrounding community help them weather one of the worst challenges to face a family – homelessness. 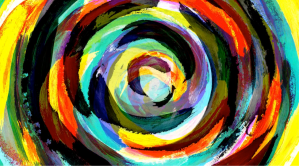 The filmmaker, Neely Goniodsky, uses impressionistic, interpretive images throughout the short to bring depth to the family’s experiences. Scene from “The Smiths.”

A supportive community makes a difference

Even while the family is on the verge of collapse as they struggle with the turmoil and pain of homelessness, the Smiths and their church group are there. The narrator’s little brother thinks it is his magic bell that is summoning the resources of a supportive community, but his older sister (the narrator) knows better. She reminds us that the bell doesn’t work without churches and people like the Smiths.

A powerful reminder for all of us, and an answer to the question I hear so often: does it make a difference? Yes, it does. 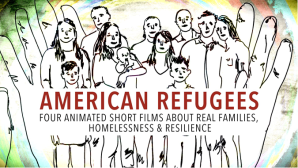 “The Smiths” is one of four short films in the “American Refugee” film series. This image from “The Smiths,” of a supportive community, is the signature image of the series.

Wondering what that “something” should be? See our list of “15 Things You Can Do to Help End Family Homelessness.”

Editor’s Note: Read the other “American Refugees” reflections in our series: