Note: This is the second in a series in which we ask our staff to react to the “American Refugees” film that most appealed to them.

Life as a homeless family is “really scary.”

“Really scary…really scary. I can’t explain.” This quote from the film “Super Dads” reflects the raw honesty found within the accounts of homeless fathers interviewed by the filmmakers.

Unrelenting to sadness, weakness and fear: A father’s words are supposed to be filled with strength. In the film “Super Dads,” however, homeless fathers open up about their greatest fears, hardships, and struggles as they talk about their experiences being homeless — something they never thought they’d face.

“Super Dads” hit me the hardest of  the four animated shorts in “American Refugees.” It was those stories of resilience that moved me most. Their hardships are all too real, and pull me back to a time when my own father was homeless, struggling to find a place where we could take solace.

Using the power of stop-motion animation

“Super Dads” is an animated stop-motion short film that focuses on the role of fathers and their children as a subset of the homeless population (Homeless Resource Center). It’s one of four animated short films aiming to raise awareness, knowledge and support for homeless families.

Collectively called “American Refugees,” the films are produced by Seattle University’s Film & Family Homelessness Project and funded by a grant from the Bill & Melinda Gates Foundation.

Read Haley’s account of the premiere of “American Refugees” in May on our blog.

A unique look at the challenges of homelessness for fathers

“Super Dads” seeks to initiate a dialogue to better understand and support homeless fathers and their children at a time when family homelessness is increasing.

The majority of homeless families are headed by single mothers, which means that the voices of fathers who are homeless with their children are often missing from the dialogue. “Super Dads” gives a unique glimpse into what it’s like for these fathers.

The film showcases three dads and their families, telling their own stories of surviving homelessness. The dialogue of the film is audio from fathers and their children interviewed at Seattle-area homeless shelters. These three accounts of homelessness and hardship are strung together, and through animation,  brought to life.

Many family shelters exclude men. This may be because of high instances of domestic violence among homeless families, or simply because the shelter cannot accommodate entire families, making it extraordinarily difficult for the fathers to find shelter where their family can safely stay together (Green Doors).

Read more about this phenomenon in an article by Real Change on the “American Refugees” film series.

It struck me how torn these dads must have felt — wanting their children to stay safely in shelters, but also wanting to be there to protect their families. It takes real resilience to, against all odds, fight to keep your family together — especially if the services that are built to help you, like shelters and social service programs, are the very ones threatening your togetherness.

In the end, though, it is the children’s outlook on their “Super Dads” (or in one case, “Super-Duper Dad”) that moved me the most. Even when sleeping in cars or shelters, these children felt the utmost confidence in their dads’ ability to care for them.

A dad faced with homelessness isn’t just a dad. He’s a Super Dad.

Watch the Trailer for “American Refugees”

I believe that a gripping story joined with engaging visuals can go a great long way to help us relate to each other, understand that no one is immune from change in circumstance, and inspire all of us to take action.

The director of “Super Dads,” Sihanouk Mariona, has won an Emmy for his stop-motion animation work on the revered series, “Robot Chicken.” In an interview for Real Change, Mariona said of the film, “It was a special gathering of stories.” After reaching out to local shelters, the filmmaking crew discovered that many fathers are separated from their children. Upon hearing this, their film was born, they say. And while it may be difficult to fit a topic like homelessness into the world of animation, they did so with style and grace.

Visit the “American Refugees” website to view a discussion guide and all four films, and to learn more about the making and inspiration behind the films. All are avaliable for stream or download.

The Discussion Guide: A Tool for Advocacy

“Watching the ‘American Refugees’ films can be a powerful experience, but talking about them with others is the next step in creating change! This guide will help you generate conversation about family homelessness and find ways to be part of the solution.” 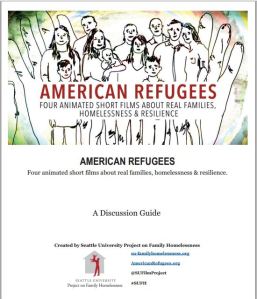 This quote from the “American Refugees” Discussion Guide, available for download on the website, describes how viewers can take steps to create meaningful change.

“Super Dads” has already accumulated almost 5,000 views on YouTube, with more scattered around the Internet on sites like Vimeo. Imagine the impact “Super Dads,” and the rest of the “American Refugees” films as a whole, are going to have!  A great way to ensure that the films’ messages are not lost, is to talk about them. The Discussion Guide brings to light many issues within the films, and works to be a part of the solution to family homelessness.

The discussion guide is great for not only personal use, but also in alliance with screenings or bigger events. “American Refugees” urges you to host a screening of your own. Whether it be at a local town hall or in your living room, viewing the films and discussing the issues is a simple but effective way to begin to combat family homelessness.  The discussion guide gives great tips for hosting a successful screening of your own. It makes action steps for advocacy simple.

Things You Can Do (From the “American Refugees” discussion guide):

1. Tell your family and friends to watch the film at www.americanrefugees.org.

2. Host your own viewing party or discussion group.

3. Use social media to share the link. #SUFH #homelessness @SUFilmProject

4. Be Sure to Visit http://www.projectonfamilyhomelessness.org for more action steps.

One More Idea for Action:

Let the creativity and artistry in the film inspire your own! Imagery and art can be powerful tools to break down stigma around family homelessness. Here’s an example.

Whether you’re learning about family homelessness for the first time, or are a long-time advocate, “American Refugees” is a moving and inspirational film series and tool for advocacy that anyone can appreciate and learn from.

Read about another “American Refugees” short film, “Home for Sale,”  in a reflection written by project assistant Emma Lytle for our Project on Family Homelessness Blog. Watch for another next week!

Don’t Miss: Be sure to read the brand-new blog post from “American Refugees” producer Lindy Boustedt on the Gates Foundation’s “Impatient Optimists” blog.

3 thoughts on ““Super Dads”: Stories of Resilience from Children and Fathers Faced with Homelessness”