Art is my coping mechanism. During the artistic process, there is power in the hands of the maker. Regardless of whether anyone sees the result or even if it is “good,” this power is healing, inspiring and uplifting.

At The Seattle Public Library’s “Create Change: Youth & Family Homelessness and the Arts” event on Oct. 29, 2016, I had the opportunity to come together with a community of people to find out how art can be used to take action towards ending youth and family homelessness. You can see an in-depth description of the full day of performances, speakers and arts events here in this story by my colleague Shan.

Afterwards, my supervisor, Catherine, asked me to come up with a creative response to my experience. As an artist myself, I was inspired by the hands-on energy I felt that day and decided to create a series of paintings based on what I had seen.

The venue was key in creating space for this to happen. The Seattle Public Library (SPL) hosted it at the Central Branch in downtown Seattle. I was familiar with the work the library had been involved with through the “Streetwise Revisited” programming, for which our project was a community partner, but I had not seen what happens there on a regular basis to address homelessness.

I found that the downtown library is a humanizing refuge. It is a place open to anyone to enter, without being subjected to judgment, and find access to resources.

At one point when I went to the bathroom, I heard the sound of crying from another stall. I noticed a suitcase and clothes on the floor inside the stall. Outside the door, I saw a woman who worked at the library. She was asking the crying woman if she was all right, and offering her help if she needed it.

I could only imagine what it would feel like to be in a place of such deep despair, and to have a complete stranger reach out and tell me that they cared about me and were there for me. I think that would mean everything; I think that is the difference between falling further and having the chance to get up again.

We think of librarians as the people who help you find books, but it is clear to me that the staff at the Seattle Public Library is committed to positioning themselves as allies. They value the life of every single person who enters the library doors, a decision that is so simple and yet incredibly impactful.

During the arts activity portion of “Create Change,” I helped out at the comic table hosted by Otts Bolisay, where people were invited to illustrate a short story addressing the topic of home.

The comic table was a space for self-reflection, but it was also a space for sharing. We talked about our comics and we told stories behind the illustrations we made.

At this table, strangers found common interests and experiences and even exchanged contact information. I talked to a woman who works with the Ethiopian community in Seattle, a group that experiences homelessness at a higher rate than many others in the area. She told me how exciting it was for her take part in this chance to make things with her hands; after a long workweek dealing with difficult problems, making art was a major stress reliever for her. Later, she met another woman at the table who was interested in a similar line of work, and the two hit it off.

As I listened to their conversation, I was amazed to think of what could come of this moment. What began as a small craft activity could turn into larger collaborations of people who care and are dedicated to creating change.

It was then especially that I felt the importance of the artistic process in advocacy work. At an individual level, art-making provides an outlet and leverage to the people who need it most. In communities, art-making creates space for human connections and discussions to develop. And beyond that, art-making is a way to draw attention to important issues to encourage engagement.

My Reaction: A poster series

To reflect on what I learned at the “Create Change” event, I decided to make a series of graphics around the theme: “Let’s make art to talk about homelessness.” These images are designed to stand as individual works, or as a cohesive group that can be presented together. 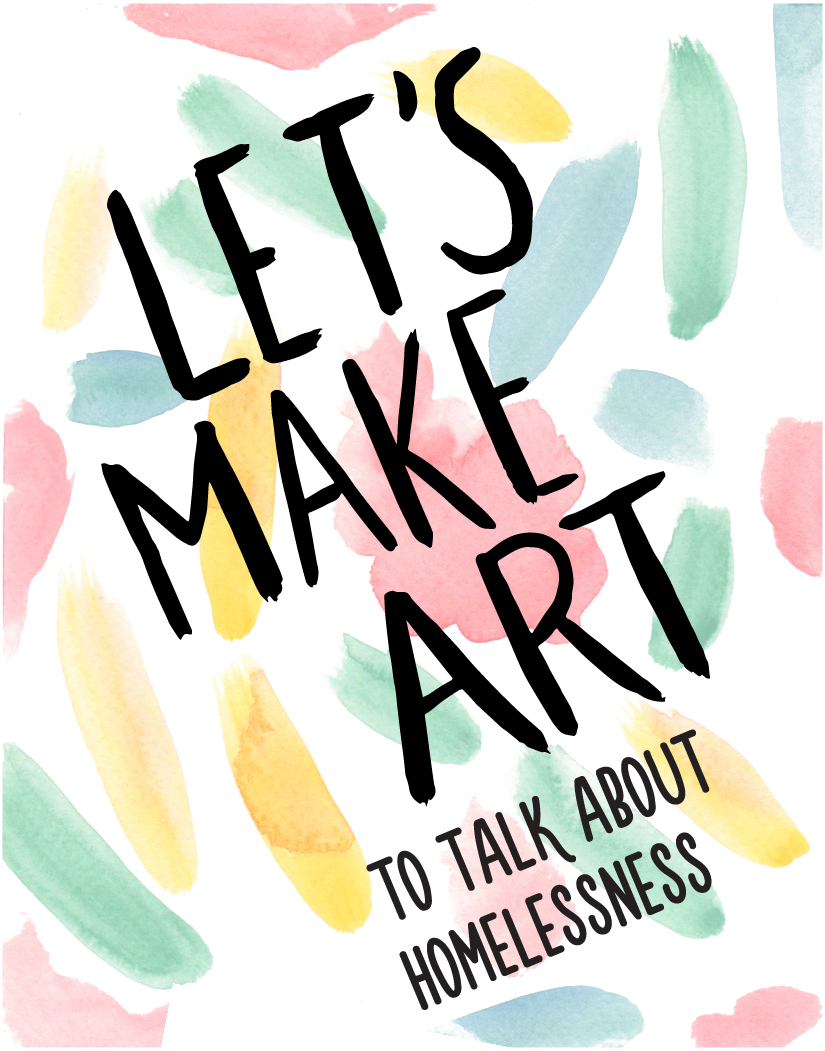 The overall visual appearance of the set is meant to reflect several key concepts. I painted them all by hand in gouache, a paint pigment that can be thinned down and painted with like watercolor. I wanted to make visible brushstrokes to reveal the hands-on process behind the work. The use of line and angled text is meant to depict the energy in movement and action. Finally, I used a bright color palette to draw viewers in to a conversation that is approachable and positive.

This illustration features a dancer from a performance by the youth dance group, “KUTT ‘N’ UP” at the opening session for “Create Change.” The dance brought energy to the room, the importance of which is further emphasized by the following quote by the day’s primary organizer, arts leader Davida Ingram of SPL: 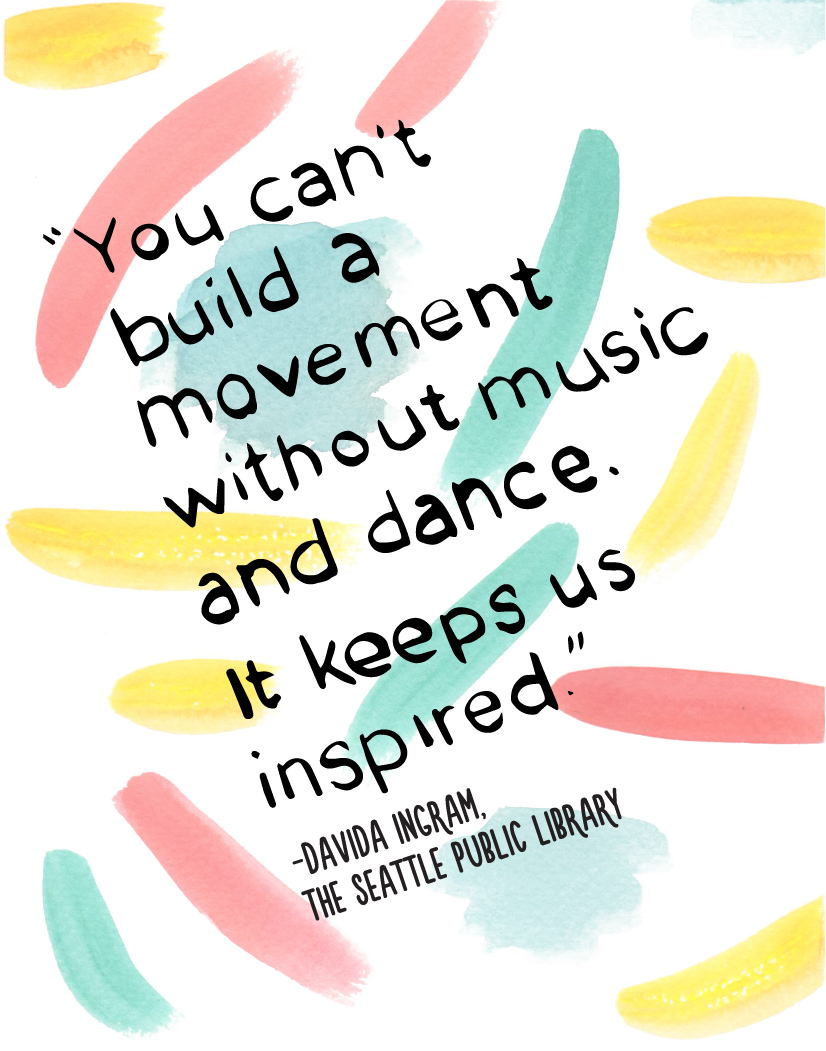 Davida is the public engagement programs manager at the Seattle Public Library, where she develops programming such as the “Streetwise: Revisited” series. She is also a leading conceptual artist in the Seattle community whose work confronts issues of race and gender through performance, installation, and social practice projects. She was an amazing force behind “Create Change,” bringing creative energy and a clear love for the community.

This illustration features a musician working on a lullaby, one of the arts activities offered during the event. The Seattle Symphony’s Lullaby Project was one of the many ways that organizations demonstrated how they have been working to use art to empower individuals. This is also highlighted through the following quote:

Note: Learn more about the Lullaby Project, in which Seattle Symphony partners with Mary’s Place, a nonprofit that provides shelter, nourishment, resources, healing and hope to homeless women, children and families.

My final illustration is of a community member working on a drawing at the comic table during “Create Change,” which I paired with the following quote about creating designs that make an impact.

Homelessness is a tough topic. It is something that a lot of people don’t like to talk about because it can feel too big to ever come close to ending. “Create Change” reminded me how important small actions are. It reminded me that we need to make an effort to show everyone around us that they matter, and it proved to me that the more we spread art, the more we spread empowerment and love.

What You Can Do:

One thought on ““Create Change” — A Day to Change How We Think about Art, Advocacy and Homelessness”