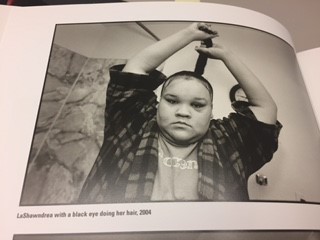 Editor’s Note: As part of our ongoing “Streetwise Revisited” work, our student project assistants are blogging about key events. Both Khadija and Shan wrote about the “TINY” screening, first Shan and now Khadija.

There’s a teenage girl with a black eye in photographer Mary Ellen Mark’s book “Tiny: Streetwise Revisited.” She is LaShawndrea, the eldest daughter of Erin “Tiny” Blackwell. Of all the remarkable photos in that book, this one really struck me.

When I saw the film “TINY: The Life of Erin Blackwell” on Oct. 14, 2016 at the Seattle Public Library, it was LaShawndrea again who intrigued me the most. I sympathized with her because of a scene where she complains that Erin was not there for her. “She’s rejected me a lot,” narrates LaShawndrea.

I related to that scene because it reminded me of the strained relationship between my mother and grandmother; I have heard my mother make a similar remark about my grandmother which was one main reason LaShawndrea resonated with me. I can understand how it hurts to not feel true love from your mother. It seems the rejection from her mother has impacted LaShawndrea into her adult life.

The screening of “TINY” was part of The Seattle Public Library’s  public education program, “Streetwise Revisited,” which focused on “Tiny” from the 1984 documentary film “Streetwise.” Our project was a community partner, and we participated by screening the original “Streetwise” film, among other activities. (You can read my post about “Streetwise” and our guest, Erin’s daughter Keanna, here.)

A Learning Opportunity and “Fangirl Moment”

October 14 was an eventful day. Local public officials had been warning us that it could be the strongest windstorm in decades, and advised us to stay home. My colleague Shan’s dorm had already lost power. I remember my supervisor, Catherine, had warned me about the weather, and said that it was okay if I decided to stay at home. But I couldn’t let my opportunity to catch up on Tiny’s story slip me by.

First there was a community tour led by photojournalist and our original Journalism Fellow Dan Lamont, then there was the screening of “TINY,” followed by a Q&A with Erin and the film’s director, Martin Bell.

The community tour led by Dan Lamont was a great prelude to the screening of the new film. The first time I saw the exhibit, I was by myself, which left me with many unanswered questions. I appreciated having Dan there to give some insight.

My favorite quote from Dan was “It’s all about a connection between the subject and the photographer.” It was very apparent that there was a connection between Erin and Mary Ellen Mark. The black and white pictures are all so intimate. From what I could see, Mark didn’t use any alteration in her photos. [Editor’s Note: According to Michelle Dunn Marsh of Photo Center Northwest, this is true; see what else Michelle had to say about Mark’s legacy in this recap of her lecture, by Shan.)

I am glad that, as of that night, over 7,000 people had already gotten the chance to experience the exhibit.

My favorite part of the community tour was Erin’s appearance along with her younger children. Though we knew she’d be at the screening, we didn’t expect her to show up at the exhibit.

I loved that moment, because it delighted the exhibit guests. Erin is like a local celebrity. My co-worker Shan Yonamine whispered to me, “I had a small fangirl moment [when she walked in].” Ha! I know the feeling, because I felt the same.

The Film as I Saw it: An Unexpected Protagonist

Shortly after the community tour concluded, the documentary finally started. It was great to see such a packed house on a stormy Friday night.

Before watching the documentary, I assumed the film’s scenes would be in chronological order like “Streetwise,” but this was different. It was an ongoing conversation between the late Mary Ellen Mark and Erin. In addition, there was footage of Erin through the years and her current situation with her 10 children, her estranged husband and her mother.

After watching it, I had mixed feelings about what I had seen. On one hand, I liked how we finally got a chance to see Erin grow from a teenager to a woman in her early forties. But on another hand, I wished the documentary told a story from beginning to end. It felt like some pieces were missing in the story, but perhaps that is because Bell and Mark weren’t there to capture every single major moment in Tiny’s life, so this style was the only logical one.

Although the documentary was supposed to be about Erin mostly, her eldest daughter, LaShawndrea, was the person I connected with the most. She felt like someone who didn’t hold back when talking about how hurt she was by her mother’s actions. When LaShawndrea said “She’s rejected me a lot,” it brought me back to my own mother’s strained relationship with my grandmother. It was just a very relatable moment, as everyone can remember a time when they disagreed with their parent. I felt sorry for Erin and LaShawndrea equally in that moment. It was so sad to see the disconnection between a mother and daughter who are just trying to make the best of their situation.

This was the scene that stuck with me for weeks after the screening.

Making the documentary “TINY: The Life of Erin Blackwell” must have been a challenging feat, requiring editing hundreds of hours of footage into 90 minutes. Though I’m grateful for the finished project, a part of me still wants to watch more footage about Erin and her family, especially as the ending introduced the critical situation of Ranaja, one of her younger children.

Following the Film: Advocacy and Conversation

Following the film, the audience didn’t get much time to process the documentary; there were a few remarks by local leaders working to end homelessness, followed by a Q&A with Erin and director Martin Bell.

Davida Ingram of The Seattle Public Library, who organized the “Streetwise Revisited” project, said some amazing things as she moderated the conversation with Erin. For instance, Davida thanked Erin because she “found a way to be generous with [her] story.”

Most people would keep the difficult parts of their lives hidden, but for Erin, being a subject of conversation and speculation seems to suit her well. She tolerated it and was open to everyone’s questions.

All in all, the “Tiny: The Life of Erin Blackwell” screening was a success. It was great to finally meet a person I have been learning about for months now. For me, learning about concrete actions, like getting involved in civic engagement and volunteering at local homeless shelters, made the event meaningful. Just seeing a packed auditorium discussing our homelessness situation feels like a true step in the right direction.

Many parts of Erin Blackwell’s story are relatable. It’s understandable to feel sympathy for LaShawndrea and her other siblings who missed out on being raised by Erin. But it’s also understandable to sympathize with Erin and commend her for doing her best while taking care of 10 children. I kept trying to pick a side between LaShawndrea’s reality and Erin’s reality as I watched the documentary unfold, but in the end I realized it was okay to accept her relationship with all her children as a work in progress constantly evolving.

As the event wrapped up and we were all eager to get home safely, Davida reminded us that on days like that, it was especially important to think of people who weren’t as fortunate as we are to have a permanent place to call “home.” That realization solidified the event’s purpose.