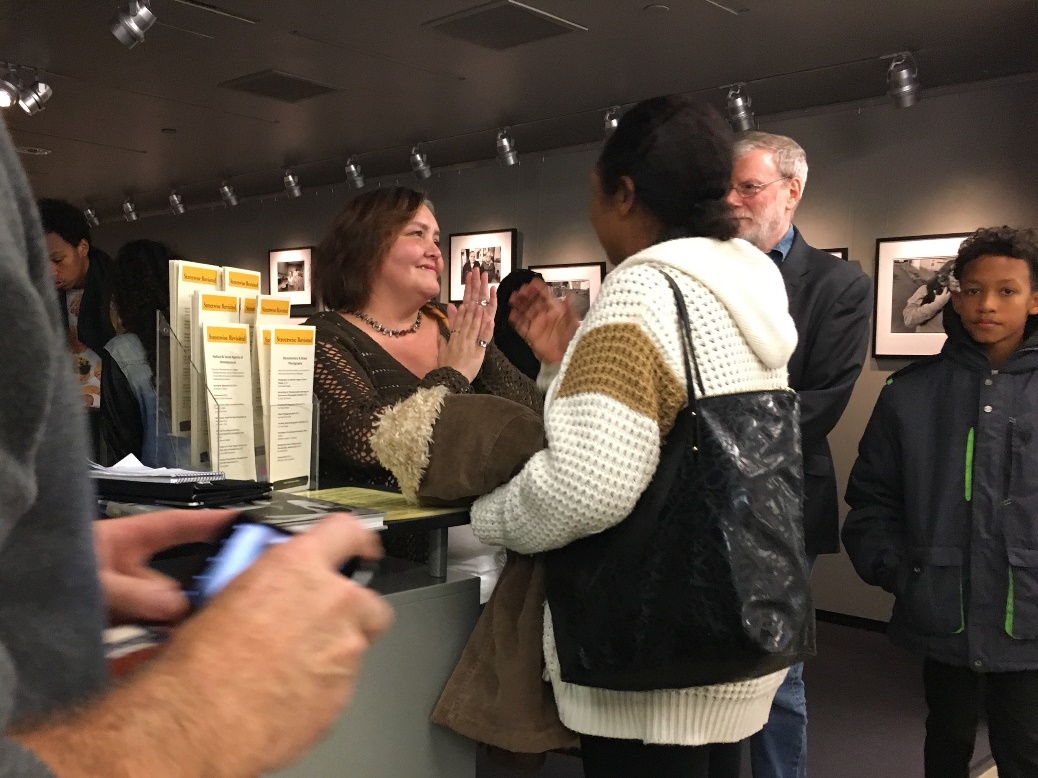 The first thing that I wanted after seeing “Streetwise” was answers. After watching the acclaimed 1984 documentary  and getting such a candid look into the lives of the nine children, I felt as though I developed an intimate connection to each of them. I knew that “Streetwise” was only one chapter in each of their stories, and I desperately wanted to know more.

In fact, I felt entitled to know more. After all, they had opened up their lives for all to see in the most raw, uncensored way. Wouldn’t they be used to sharing their lives with the world by now?

This is why I was so excited to attend the screening of “Tiny: The Life of Erin Blackwell” – the new film about one of the children in “Streetwise” — at The Seattle Public Library on Oct. 14. Both “Tiny” herself — Erin Blackwell — and director Martin Bell would be the special guests.

As I took my seat in the audience, I couldn’t help but wonder what I would find out from Erin and Martin about the “stars” of “Streetwise.” Where are they now? Are they still homeless? Are they still struggling with addiction? Or, had things gotten better for them? Maybe they got the help they needed. Maybe the film was a turning point for them. Maybe some of them are here today. All of these thoughts filled my mind as the lights dimmed and the movie began. I was ready for answers.

I knew beforehand that this film had not been seen by many people. Because it is new, and not nationally distributed yet, it’s only been seen by a few audiences, including at SIFF and at the National Alliance to End Homelessness conference. The opportunity to see this film was made possible by The Seattle Public Library’s “Streetwise Revisited” project, which is a public education program focused on “Streetwise,” the 1984 documentary film, and the 30-year collection of photos by Mary Ellen Mark. We are a community partner of The Seattle Public Library for “Streetwise Revisited,” and attending the screening was just one of the ways we are supporting the project.

Before the Screening – The highlight of my career

Before watching the film, I was already somewhat familiar with the happenings of Erin’s life since “Streetwise.” I had heard from her daughter Keanna Pickett at our campus screening of “Streetwise” on Oct. 7  and I had attended several community tours of the “Streetwise Revisited” photo exhibit, one of which took place right before the screening.

During that pre-film tour led by photojournalist Dan Lamont, I learned that Erin had developed an endurance to being an object of attention because her life had been made very public through the work of Mary Ellen Mark and Martin Bell.

You can imagine my surprise when, shortly after, both Erin and Martin appeared at the photo exhibit.

After overcoming the initial shock that Erin – the Tiny of “Streetwise” – was standing right in front of me, I was able to meet her and Martin Bell personally, which was undoubtedly the highlight of my career as a project assistant so far. I was excited to see that Erin was so open to engage in conversation with the people who were viewing the exhibit and to answering the questions they had about her life and the exhibit. After this encounter, I had very high hopes for the film and discussion to follow.

My Reaction to “Tiny: The Life of Erin Blackwell”

Now, back to where I began. I’m sitting in the Microsoft Auditorium at the Central Library; I’ve just met Erin and Martin Bell. I’m about to watch the new “Tiny” film, where I expect I’ll learn all about Erin, her family, and her life after “Streetwise.” Before watching the movie, I really hoped that things were better for Erin and that the film would have a fairy tale “happily ever after” ending. Still, part of me knew that wouldn’t be the case.

After watching the film, I learned that Erin is the mother of 10 children, and she became pregnant with her first child when she was only 15 years old – only one year after “Streetwise” was shot.  Several of her children had been in the foster care system and she did not raise them. However, her five youngest children are in her care.

In the “Tiny” film, she said, “I regret being so young having kids. I wish I did my whole life different. But, I also think if I did it different, I wouldn’t have the kids that I have now.”

I also learned that Erin struggled – and in the film continues to struggle – with an addiction to methadone; she is often shown taking her treatment medication and has to sleep frequently. Her daughter, LaShawndrea – who had been raised in foster care – openly argues with her mother about her addiction and it is clear that Erin kept promising her children that she would stop, but continued falling into a vicious cycle of drug use. This addiction has been passed onto some of her children; one son was using heroin daily to “get normal,” and a teen daughter suffered an almost-fatal heroin overdose and was hospitalized at Seattle Children’s near the end of the movie.

I was surprised to learn about how Erin felt about her time on the streets. When she was asked about it in the film, she responded almost longingly, saying, “I made a lot of money. I got to spend it on whatever I wanted. I was a kid in the biggest candy store. It’s never going to be like that again.”

After watching “Streetwise” and seeing everything that Erin had to endure on the streets – being homeless, forced into prostitution and watching her mother being abused – I had just assumed that she would regard that as a dark and difficult time in her life. But now, decades later, she has a car, a home and 10 children. And yet, she still remembers her time on the streets fondly, saying “I do miss the streets a little bit and the people I knew. It was like a family, a lot of memories. It will never be like that again.”

However, it is clear that she does not want the same for her children. “I’d like to see my kids do something. They’re young enough to be a star.”

The Discussion – Not what I expected, but what I needed

For me, the film raised a lot of questions about Erin’s life, perhaps more questions than it answered. This is why I was so excited for the post-film discussion with Erin and Martin Bell. I had assumed that many of the other audience members would have the same questions that I did, and that we were about to get some answers.

The beginning of the discussion was promising. Davida Ingram, the public education program manager of The Seattle Public Library, introduced Erin with a biography that Erin had written herself:

“Erin is the star of the documentary ‘Tiny: The Life of Erin Blackwell.’ She is also featured in ‘Streetwise,’ an iconic film that documented the lives of young people who were experiencing homelessness in the early 1980s in Seattle. She is kind, nice, honest and the proud mother of 10 children. She lives in Seattle and when she is not seeing about her active family she is pursuing her passion with furniture. One of her dreams is founding a community space for people, especially children who left home with no place to go.”

I was surprised that Davida followed this introduction by explaining that Tiny is a very private person and that it would be difficult for her to speak in front an audience.

Davida’s statement turned out to be indicative of the direction of the discussion. Going into this event, I realize that I had made so many assumptions about the film and Erin and what she would be like. I thought that Erin would be accustomed to speaking publicly about her life, the films and the issue of homelessness. I also thought that she would be eager to share her story and use it as a tool for advocacy. However, this was not the case.

There was only time for a few questions during the discussion and Erin ended up deferring to Martin Bell to answer the majority of them. He said of “Streetwise” that “none of this would exist without Mary Ellen” and that “it all started with Mary Ellen and Tiny.” I was excited when he pointed out that many of the other children who were featured in “Streetwise” were in the audience, but it made me wish that they had been introduced at some time during the screening.

Once Martin Bell had answered a few questions, Erin was asked what kind of support she needed that she didn’t have during her time on the streets. In other words – what could have prevented her situation? She responded by saying that “the only thing I can think of is education” and “it really depends on the person; the child has to break the cycle.” In her case, it is clear that she did not break the cycle of addiction that we saw with her mother and that several of her children were also unable to break this cycle. But for some, the cycle of homelessness and addiction has been broken. [See our posts about the screening with her daughter Keanna here and here.]

What I Learned – There are no perfect answers

Overall, the discussion between Erin and Martin Bell was not what I expected and, to be honest, it’s not what I wanted. However, it did teach me a valuable lesson. I went into this event expecting to learn all about Erin and her children and her life, so much that I forgot that I am not entitled to these answers.

I realized that just because Erin’s life was featured in two films, it does not obligate her to share explicit details about her personal life, nor does it obligate her to become a spokesperson about homelessness. She had already been generous enough to share her experiences through two films and a photo project, and her presence at the event was powerful enough.

I also learned that there are no perfect answers to many of the questions she was being asked; if there were a perfect solution to homelessness, I would not have even been sitting at the event in the first place.

However, what is important is that progress is being made and that projects such as “Streetwise Revisited” exist. There is no clear-cut answer to homelessness, and even if Erin were an outspoken advocate, it would not change this. Instead of focusing on what could be, we need to focus on what can be and what is already being done.